We have 108 guests and no members online

This article is about my experience with calibrating a M4MC Rochester Quadrajet to work properly on the 225 slant six in my 1965 Barracuda.

The Rochester Quadrajet spreadbore 4bbl carburetor has a much smaller, centrally located fuel bowl that seems to work well for off-road vehicles.  Since I also had a surplus Rochester Quadrajet that I removed my 1977 Pontiac in November of 1997 (for a propane conversion I completed in January of 1998), I thought I would give it a try in August of 2004.  Just bolting-on the carb with its Chevrolet 350 calibration after sitting dry for 7 years, I found that it ran better than my AFB. After a disc brake upgrade that dragged on way too long (several years), I found that my Quadrajet's fuel inlet wouldn't seal and the carb would overflow, likely from a rusty gas tank.  I had Specialty Carburetors (SC - Toronto, ON) rebuild it and they switched it from a #77 primary jet to a smaller #72 jet.

After replacing a rusty gas tank in 2015, I ran the AFB again to ensure that any residual rusty silt didn't settle out in my newly rebuilt Quadrajet.  On November 16, 2016, I had enough of chokeless cold starts and reinstalled the Quadrajet.  After a few tankfuls of gas, I found that, even though I now have a working choke, it was difficult to start in cold weather and it has noticeable lean surge at part throttle. 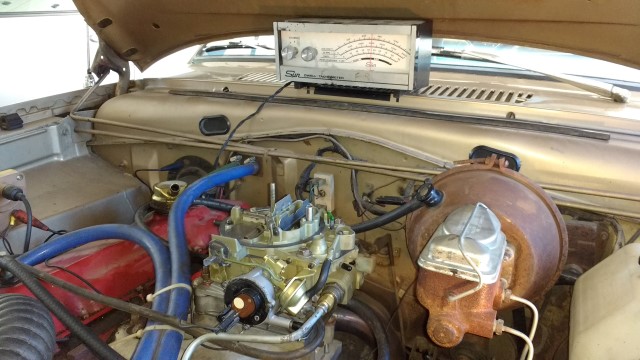 Specifications about my 750 CFM Quadrajet carburetor: